Version 2 of the online library is now well on the way. with a fully functional framework in place for testing.  This update has implemented a completely new backend, based on the PostgreSQL database, a new interface with popup previews, and a number of other new features and improvements. The attached images give a preview of the things to come, albeit showing "dummy" test framework data. The library component of the  version 2 development version can be seen here.

The author entry has been separated into a related detail table to give more flexibility handling the variable author numbers. Along with this change, a new interface feature has been implemented giving a "mouseover" preview of the related records. The attached image shows the tabbed pop-up for the library administrator, showing the commonly available "author" record and the restricted "approval" access. The approval tab will not show for those not permitted to approve records. The "wind back" facility to allow easy correction of poorly entered or edited records has been maintained as a key feature of the new version. 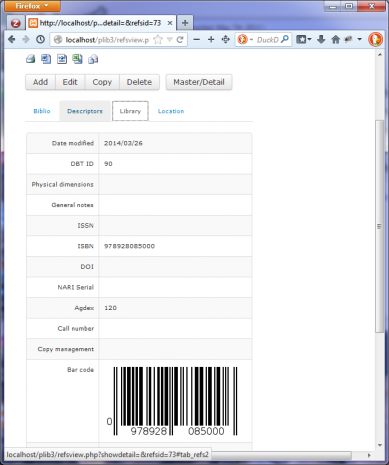 Barcodes can be useful in managing stock and book identification. The system can be set up with nearly any field. The ISBN is a recognised and useful code to use. This image shows the system displaying an ISBN barcode.

Related projects and library locations can be added to a Google Maps interface with clickable links to detail records.

This release has also introduced dynamically generated Pie and Gantt charts to boost the system reporting and a task tracking system to help situations where there are associated physical libraries in different geographical locations.

There are still a few things, especially data import/export, full text search tweaking, reporting, and documentation, to be implemented, but the new system is ready for migration of the data ..... just need to find the time.